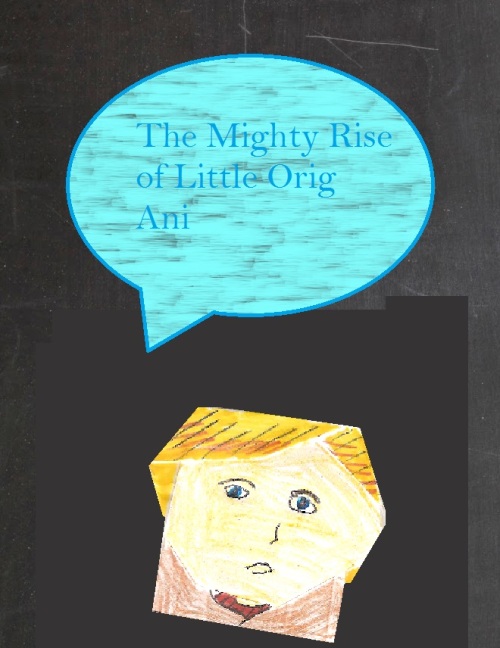 The Origami Hater
By Tommy
It all began when Ms. Calhoun was replaced by Bob MacDonald, green-eyed, goatee sporting, twenty-something year old origami hater. Ms. Calhoun was suspended for “spending too much money on origami books.” Then, when Mr. MacDonald came, all the origami books were off the shelves.
Kellen and I were in the library, talking with each other, when Harvey took out his Darth Paper/Anakin in front of us. “Fear the power of the Dark Side!” Vader shouted. “General Creasous was right about Mr. MacDonald!”
Mr. MacDonald looked up from the book he was reading and stared straight at Harvey. “Is that origami?!”
“What does it look like to you, sir?” Harvey snapped. I don’t think he took Mr. MacDonald seriously, considering his age. “For someone of your reputation, I would have expected you to be a little bit….older…” Another Grievous line. I’m still suspicious.
Mr. MacDonald got up, and started walking toward Harvey. “Hand it to me, NOW!”
Harvey handed him back. Kellen and I looked at him strangely.
“I thought that rule left.” Kellen held up Luke as he spoke. I almost brought out Foldy-Wan, until Mr. MacDonald yanked Luke out of his hand.
“Well then, it’s back UP!” and he stormed back to his desk, and locked the puppets in a drawer.
Harvey whispered, “How can that guy hate origami so much?”
We didn’t know then, but we were about to find out how much origami an origami hater could hate.
My Comment: I saw Jabba already in the drawer! How did THAT happen?
Harvey’s Comment: Whatever. Darth Paper told me to tell you that. It ain’t my fault.
My Other Comment: Oh, he’s going by Darth again, eh? I thought you were done with this nonsense!

Strike Two
By Kellen
Um.. I’m gonna use the recording thing, so… but… uh… yeah. So, I was pretty mad about Luke, but I had to warn the others. I rushed through the halls, past the NO RUNNING sign. I saw Amy and Sara with their puppets. “PUT THEM AWAY!” I yelled as I was passing the NO YELLING sign.
“What?” they said. They started to put them away, but it was too late. Mr. Snider saw them. Now, Mr. Snider is a good guy, but he sometimes takes the rules too seriously. “Hand it over kiddos,” he said. Then he went into the library, and stuffed them in Mr. MacDonald’s drawer! I told the girls about everything, and they agreed to help spread the word.
I sat down next to Sara and Amy, defeated. “Strike two…” I mumbled.
Harvey’s Comment: Q and Lance told me Ms. Toner had stuffed their puppets in that same drawer!
Tommy’s Comment: We’ve GOT to ask Origami Yoda what to do about all this!

We’re Doomed!
By Lance
I couldn’t find Dwight at school earlier, so I rode my bike down to Dwight’s house. Dwight’s house had a good odd look to it. I threw a pebble up to Dwight’s window and waited for him. Dwight’s window opened, and Dwight said, “Origami Yoda isn’t here. He was taken by Harold Hummer.”
“What?” I couldn’t believe it. “Why did you let him do that??”
“He brought me a Rib-BQ from school,” Dwight said blankly. “I was home sick.”
“But dude!” I exclaimed. “You can’t just give away Origami Yoda for no good reason! He’s been stolen enough this semester without you going soft!”
Dwight made a face at me and said, “Whatever, man.” Then he closed the window.
Even though he’s been taken away by Mr. MacDonald, I could almost hear C-3P0 saying, “WE’RE DOOMED!!!”

The Plan
By Quavando
Even without Yoda, we hatched a plan. It was a GREAT plan. Instead of telling you the plan, I’ll tell you how it went. First, Lance came to Mr. MacDonald and asked where Moby Dick was. Mr. MacDonald got up and showed him the way. Then, Tommy and I snuck back behind his desk. We thoroughly searched for our puppets. Mike was over by the entrance to the library, and he was giving us the warning sign. That meant Mr. MacDonald was heading back. We signaled Mike to tell Sara and Amy on the far side of the library to start shouting. Mike signaled, and they wailed. Mr. MacDonald went to hand them ISS slips. Everything was going according to plan, except that I couldn’t open the drawer that held our puppets! Nothing was working. Tommy examined it quickly.
“Dude,” Tommy said. “This drawer is LOCKED. We need a key to open it.”
“A key…a key…” I quickly rummaged through Mr. MacDonald’s forms and slips and books, until I finally found, under everything else, a book with a key. Without looking at its cover, I snatched it up and ran out of the library. Mike signaled the girls, and they politely walked away from the library. When we got back into the hallways, I opened the book. Immediately, a piece of origami fell out of its pages. I pulled out the key, and put it in my pocket. I was just about to run back into the library, when Sara picked up the origami puppet and gasped. It was an origami Young Anakin. I glanced at the book. In big letters scrawled in a child’s handwriting, it said, “My Diary.”

My Diary
By Bobby M.
October 4th, 1999. People still make fun of me about Little Ani. But when they find out I’ve started my own rebellion with Jar Jar, Qui-Gon, and Obi-Wan, they won’t be laughing. We’d make sure McQuarrie Elementary School didn’t become a boring snore-fest. Unfortunately, I recently found out that Harvey Cunningham [Harvey’s Note: THAT’S MY DAD!!!] plans to destroy my rebellion against SmartKidz.
“Hey look! Origami Anna wants to fight!” he mocked.
“It’s Ani! Not Anna!” I was pretty mad.
“Origami is stupid. Nobody would hang out with you. Get rid of your rebellion, it’s for your own good.”
I felt hurt. I ran to my secret hideout by the trees (by the way, school was over).
Unfortunately, my teammates also felt pretty hurt.
“Origami has NO point!” Norton said, stomping on his Padme. “It just gets us laughed at.”
“I know right?” Brandon agreed, tearing his Qui-Gon.
Each one of my friends did the exact same thing, and that was the end of our rebellion. I felt a change in me that night. Maybe they were right. Origami had no place in a school like ours. Maybe I should just watch what Edu-Fun was advertising. Maybe SmartKidz wasn’t all that bad. My friend Christopher tried desperately to get me to come back, but I had made my choice. I never wanted to see another piece of origami again.

The Reverse Transformation
By Amy
Let’s hope Tommy’s plan works. Tommy, Kellen, and Harvey went up to Mr. MacDonald and held up Little Ani. Mr. MacDonald immediately stood up. “W-where did you g-get that? Did you r-r-read-”
He was cut off by Kellen. “You don’t have to hate origami. You work at a school where origami is loved, and you wouldn’t be considered a weirdo if you went around carrying a puppet on your finger—“
“Actually, you kinda would…” Harvey cut in.
Kellen ignored him. “Please, give us our puppets back, and come to the Light Side.”
Mr. MacDonald sighed. “Well, when you put it that way…” He smiled, and it actually made him look pretty close to our age. “Okay.”
I pumped my fist. We all got our finger puppets back, and not only that, but Mr. MacDonald went straight to the principal’s office, and returned with a message for us.
“Hey kids,” he said. “I just talked to Mrs. Yavada, and we’re gonna have a serious talking to with Harold Hummer. We’ll make sure Dwight gets back his Origami Yoda.

The Third Note
By Tommy
Harold slowly made his way through the library. He held Origami Yoda on his finger. Mr. MacDonald stood in the corner, waiting for him.
“Harold,” he said. “You know I don’t permit origami in this school. Hand it over.”
Harold looked surprised, but he didn’t have much of a choice. He gave Yoda to Mr. MacDonald, and walked away, defeated.
I went up to Mr. MacDonald after Harold was out of sight.
“So,” I said. “Not that I’m ungrateful for everything, but what happens to Mrs. Calhoun now?”
“She’ll get reinstated,” MacDonald gave me a stern teacher-look. “And I’m going to transfer somewhere else.”
My heart sank. “Oh…. I’m sorry.”
“Don’t be,” he smiled. “You know exactly where I’m transferring to.”
“Williams Middle School,” I said. “You’re gonna stick with the other Origami Star Wars school.”
“Of course. From what I’ve read of your case files you leant me, I’d like to talk to their Student Council. I’m quite impressed by them.”
I shook his hand. He may have been a little gruff at first, but he proved to be a good guy at heart. I was about to leave the library, when I saw Mr. MacDonald look quizzically at something. I followed his gaze. Another note from General Creasous.

Jedi scum. You have tricked me into stealing a decoy puppet, you’ve stopped an army of Separatists, and you’ve turned an enemy into an ally. I guess this means….

I shall deal with the Jedi slime, MYSELF.