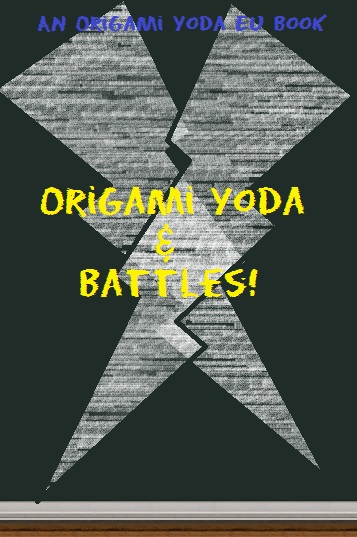 Note from author: This a crossover between Origami Yoda and a REAL thing I do called Battles. Link to the website at the end of the story.

McQuarrie and Battles
By Connor

So, my mom is taking us on a trip to Virginia to do some stuff for her job and see Uncle Jimmy, for one week! Not wanting us to miss our education, she enrolled Sean and Meghan to the nearest Elementary School, and Katie and I to the nearest Middle School (with fourth and fifth). That school, as it would be, was McQuarrie Middle School! I can’t believe they’re real, even though they are in 8th grade.

So, my first day there. So… weird. During lunch, I instantly looked for the gang. Sure enough, there they were, Tommy and Sara, Dwight, Harvey (still here?), Rhondella, Amy, Dwight, you get the picture. So I sat down, and they all just stared at me like I just dropped down from the sky. “Sorry,” I said, “Mind if I sit with you?”

“Fine with me,” Tommy said. Sara, Kellen, and everyone nodded in agreement. Harvey… was just Harvey. “I am not letting some fifth grader sit at our table. It’ll make us look weird,” he said. “Like we’re not weird already?” Kellen said. “Origami Yoda, what do you think we should do about… this kid?” Sara asked. “Connor,” I said.

Dwight held up Origami Yoda and said, “Let him sit, we must. A valuable asset in the near future, he may be.” Dwight put down Yoda, and started chewing on his Rib-Q. Boy, when they said it was squeaky, they weren’t kidding. “So, what are your hobbies, Connor?” Rhondella asked. I put down my lunch and fished around my backpack, until I found my drawing book. “Something I do back at my school, I call it Battles.” Harvey snorted. I gave him a dirty look, and continued. “The main mascot is Twister, champion of Battles: October, and the finale.”

“What else is there?” Mike asked. “You can find out more on my website I made for it.” I handed Tommy a slip of paper, which was passed around. “expandeduniversedotorg.wordpress.com? That’s the longest word since-” I cut him off and said “smiles. Heard that one already.” So we all continued eating, unaware of what was later to come…

The Explanation
By Tommy

So I went to the website, and it was amazing. The kid had only five fan stories (one of them his), but he had two followers, and there was that “The Start” story that explained everything! The whole thing, stooky! Even with the doodles of the champions. For a fifth grader, he’s imaginative!

So the next day we asked for Connor to come over, which he seemed excited to do. “So,” he asked, “Did you look up the site?” I nodded my head. “Dude, your doodles were stooky!” Kellen exclaimed. “I liked the Portal Somewhere,” Sara added. Harvey snorted and said, “Snore-fest, I say. That Coat Boy was bad. I don’t know how you kept it up.” Connor rolled his eyes. “Skateboarding Sweatshirt. You didn’t even look at the website, did you?”

“Correction,” Harvey retorted, “I looked at one character, your only evil champion. Twisted Twizzler. Also, Flying Tie, really?” Connor just went into his lunchbox and fished something out; origami, but I couldn’t tell who it was. “This,” Connor explained, “Is Origami Twister, Twister-gami!” There were a couple of ohs and ahs. “I could fold a better piece of origami then that!” Harvey said. “Then why don’t you,” Lance asked sarcastically. “Because I don’t want to,” he retorted. So we changed the subject, and things just went downhill there.

So I decided to hang out with Connor, him being stooky and all. So we were just leaving school with some other kids when one came up to us. “Hello,” he said, “I am Arnold.” Connor shook his hand. “Nice to meet you,” he said. I didn’t know why he was acting so nice to a totally unknown kid, but I shook Arnold’s hand anyway.

“I heard about that Battles thing,” Arnold spoke, “and I made one of the characters. Meet… Paper Twizzler!” He took out a fold paper shaped like a Twizzler. “That is cool!” I exclaimed, “What are you going to do with it?” Arnold smiled a devious smile, one that reminded me of Jacob. “I am going to destroy Battles from the inside-out!”

He ran off, and we gave chase. He went under and over the playground, through the crowds of kids, and eventually lost us. “Well, that leaves us with two things,” Connor muttered. “I know that one is we have a new enemy on our hands,” I replied, “but what is the second?”

“We only have until Saturday to defeat him.”

The Plan
By Sara

Kellen and Connor told us everything they saw. “Do you know this kid?” Tommy asked. “Maybe he’s a viewer on the site and seriously dislikes Battles,” Connor replied, “or…” Everyone looked at Harvey. “What?!” Harvey complained, “I may like the kid’s style, but I didn’t ask him to do it. Also I’m [mumbles].”

“What?” Lance asked. “I might be liking Battles a LITTLE,” Harvey said clearly. “Finally,” I said, “Something you like!” Harvey rolled his eyes. “Don’t get your hopes up,” he replied nastily. “Anyway,” Connor interrupted, “We need a plan. Thoughts?”

“Maybe we should follow him to his locker, and see what he’s doing,” Tommy suggested. “Actually,” I replied,”That’s not bad.” So we all agreed on who would do what. I think the next chapter will explain better who is with who.

I got teamed with Sara and Tommy, who were pretty much just talking with each other most of the time. I looked over to our look-out team, pointing to my mouth and saying, “Mouthwash.” We found Arnold’s locker. “Guys,” I said, “Arnold might be expecting us, so look out for traps.”
As soon as I said it, a couple of kids jumped out of nowhere and started shooting spitballs at Tommy. “TOMMY!” Sara shouted. She jumped in front of him, and they chased after the two kids, leaving
me to check out the locker. When I opened it, I couldn’t believe my eyes. There were posters of amazing creative ideas, countless ideas.

One of them was buried beneath most of them, barely seen. I pullled it out, and it was a comic idea. Comedy and action was in it, and it was signed by Arnold. I realized that he must have had such a good idea, and was shunned and teased for it. After all these years, he has been scarred, and now tries to get rid of everything creative. Including Battles.

Either I stop him, or persuade him to turn back to the Light Side.

So we were all doing our job, and for some reason everyone was saying I was annoying. Can you believe that? Suddenly, Tommy and Sara came running down the hall, followed by two other kids with spitballs. “They’re in trouble!” Rhondella yelled. We ran after them.

The two kids started firing spitballs at us. I deflected them with Darth Paper’s lightsaber, hitting the two guys with their own spitballs. We finally got a good look at who they were. “Craig,” Sara said. “And Kurt. Tater Tot’s nostrul friends. Why am I not surprised?”

When we made it to Arnold’s locker, Connor explained everything that had happened. Suddenly, there was a whirring sound. Tens of that sound. We all turned, and right in front of us were a bunch of paper air planes, dressed up to look like human dragons. “DRAGMAN!” Kellen screamed.

When they started to come at us, we ducked behind the locker door. There were probably about 15 of them, and Connor snuck by them. “NO, don’t!” I yelled. But he sneaked away, unknown to us where he was going.

To The Rescue!
By Mike

I was on search team number two when I saw Connor and a bunch of paper air planes looking like Dragman chasing him. “INTO THE LIBRARY! NOW!” he screamed. We complied and ran up behind him. Lance shut the door, creating a barrier between us and them. “Now what?” Amy asked, “and where’s your team?”

Connor told us everything that happened. “I got a plan, though,” Connor continued,”I’m gonna go stop Arnold with Tommy and Sara, and you guys grab all his comics and ideas.”
“Why do you get to stop Arnold?” Lance asked. “I’m the one he wants,” Connor replied sternly.

Lance backed off. “Amy and I will go grab the comics. Bye!” Lance replied, and ran down with Amy. “Well,” I said after they left, “let’s go beat the mastermind.”

The Final Battle
By Connor

I saw Arnold sitting in a classroom, just waiting for me. He took out his laptop he stored on a random desk. It was logged into my account! “Time to finish off your Battles once and for all!” He was  hacking my account! “NO!” I screamed.

I kicked his spinny-chair backwards, sending him rolling out the door, into the busy hallways, leaving him to be carried away by rushing students. I turned off the computer. I felt bad for him. He had so much creativity, but fell to the dark side.
Maybe now was my chance to save him.

Connor met up with Lance and Amy, and they all crowded around a computer. When I finally got to see what they were working on, I gasped.

It was an entire website dedicated to Arnold’s ideas. All his stories and comics were on there. He actually had some really cool ideas.

We showed the website to Arnold, and he completely broke down into tears. He apologized for everything, and, after working on his new website with Connor, they became good friends.

“Why did you help the kid?” Harvey asked Connor about Arnold. “he tried to destroy what you worked for!” Connor turned to him. “I learned what happened to him in the past,” Connor replied, “sure he made some bad choices, but I’m willing to forgive him, since Someone forgave me.”

Arnold still attends McQuarrie. Connor, unfortunately, had to leave because their trip was over. But Connor and Arnold are always working together on story ideas and comics and such. Connor showed everybody at McQuarrie the power of forgiveness. And a really cool game that McQuarrie will be playing forever.