The history of Jacob Minch is revealed, in a story told by Jacob, himself.

Welcome to The Jacob Minch File!

Guys, It’s me, Ryan J. Knight.  I was able to access into his file and I have a warning: Be careful when reading this!  Jacob has evil plans, and we have to stop him!  I might comment now and then on this file to tell you the truth about Jacob.  But whatever you do don’t- ZZzzz.

CHAPTER 1: HOW TO FOLD EMPEROR PAPERTINE 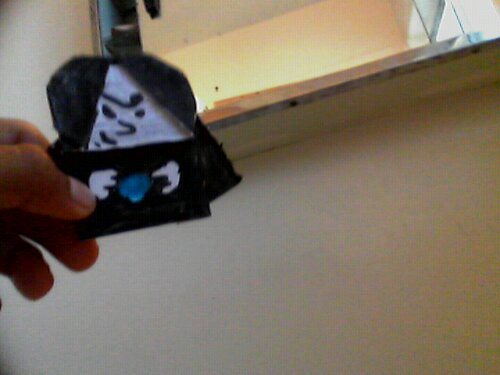 1. Start with a 1/4 sheet of paper, just like Origami Yoda and Darth Paper. Make sure the paper is tall.

3. Fold the head the OPPOSITE way of how you do Origami Yoda and Darth Paper.

4. Fold the “ears” back behind the puppet, tucking it into the head.

5. Fold the top and bottom corners back, rounding the “hood.”

1. Cut out two strips of either blue paper or white paper that you color blue.

2. Fold the strips like a straw-wrapper snake, and then fold them back out.

3. Tape/glue them to Papertine’s robe.

4. Fiddle with lightning until it’s how you want it.

Ryan’s comment: This can also make a cool Origami Jedi Bob, if you draw a beard, yellow face, brown hood, and a gray shirt.

My childhood life was nothing but torture.

I mean, sure, I had some good times. Heck, when I was seven, I was always playing around with my best friend on the planet. Guess who? Dwight.

One day, I was sitting with Dwight, outside the new movie theater, Pittsburgh Oaks. The wind was rustling my thick black hair, and it was only making Dwight’s golden brown hair get more tangled. Dwight and I had just seen an awesome movie that had just come out, Star Wars Episode III: Revenge of the Sith. Dwight had never seen Star Wars before, and I wanted to be the first one to show him.

“Brown.” Dwight said, but I knew that was Dwightish for “yes.”

I was bored. I glanced at the clock ahead. It was 2:30, and we were waiting for Dwight’s dad, Mr. Tharp, to come out with the collectible posters for both of us. So I decided to wait at my seat and start making some origami, which I learned from. . . never mind, I’m off topic.

I tried making something to fit the mood of the movie. Something, or someone, who really personified the movie.

“Palpatine!” I said, pulling out my limited edition black/yellow origami paper. I had shown Dwight a little bit of origami before, but not all that much. He knew how to fold frogs, and occasionally a box, but his dad was the one who really taught him how to make origami cranes. Oh, how Dwight would play with those cranes! His eyes lit up, his mouth formed a semi-smile that he only makes when he’s really happy, and, most of all, he would get up, happily, and run around in circles, holding the origami crane in his hand.

“Awesome!” Dwight said, in reply to my Palpatine idea.

It took about 15 minutes, working in the hot summer sun, until I finally thought that I’d got it nailed.

“Dude!” I cried, “I did it!” I held up my origami Darth Sidious for Dwight to see. He made his semi-smile, which meant he liked it.

“There’s something. . . off about it,” I said, studying it’s hood. The fold was somewhat lopsided, and just didn’t look the way I wanted it.

“Here,” Dwight said, reaching over to me, and taking my origami Emperor.

“But you said that something wasn’t right,” Dwight said, “so I’m gonna help!”

I was a very unstable little boy. With a sudden lunge, I attempted to pull the paper from Dwight’s grip.

“Give it back! It’s mine!” I said, fighting with Dwight, until we had fallen off of the bench we were sitting on, until we landed on the hard gravel ground. Dwight was fine, but my arm really hurt.

“Ah!” I screamed, holding my arm. The entire right side of my arm was scratched up and bleeding. Dwight, on the other hand, was sitting back up on the bench, ruining all my hard work on my origami Emperor.

“Introducing. . . EMPEROR PAPERTINE!!!” Dwight said, running around like he does with his origami cranes. He was smiling, laughing, and taunting me, saying, “Do you wanna play with me, Jacob?”

“You big jerk!” I said, maybe a little too harshly. I think it was really the pain in my arm talking. “I HATE you!”

He ran back to his dad, who was approaching us with the posters, ready to hand them to us.

“Dad!” Dwight said, “Jacob pushed me off the bench, and said he hates me!”

“Jacob! Is this true?!” Dwight’s dad said, about to lose his temper.

“Well, yes, but-” I started, ready to bring up how Dwight started it, but Mr. Tharp interrupted me.

“C’mon. We’re going home, now. Jacob, I’ll call your mom to pick you up.” He took both posters, and lead Dwight to the car. He slammed the door hard, and walked back over to me, his cheeks red with anger.

He dialed the fake number that I gave him, which was actually a phone number for Billy and Dom’s Pizza Parlor.

“Yes, is this Mrs. Minch? No, I would not like extra pepperoni! Is Mrs. Minch there?”

“Ok, I must have the wrong number. Sorry!” Mr. Tharp hung up the phone, awkwardly, and turned back to me, ready to dish out his worst. But by then, I was long gone. My only companion. . .