As most of you have seen, I’ve been really tired, so I won’t be online for a while. I need a week to rejuvenate, and also to read some more MOU stories, in anticipation of an upcoming MOU Story that I’m writing with another Council Member. Here’s all I have left!
(Do note that this isn’t exactly the canon reading timeline list.)

Also, Doctorigami Strange is so good. Even though it’s unfinished, I think CD has done an excellent job with it and I love it so much.

Firstly, Kid Fold 2 has reached an end! It’s so great! I loved the story through and through, and it’s OM’s longest story yet.

Next, Hades’ Folders of Tomorrow 2 has a new chapter, featuring Constancrease: The “HeckBlazer!”

Thirdly, it’s time for the interview with Origami Master53, who I managed to catch at a McDonalds in Paris.

Q. How are you doing?
A: I am doing pretty good! Thanks for asking!

Q. What got you interested in Origami in the first place?
A: I was looking for a book in 3rd grade and found The Strange Case Of Origami Yoda! After I finished it I started making origami and wanted to read the rest of the series.

Q. What’s your favorite Origami Universe so far?
A: Well… Either the DCOU or MOU

Q. Favorite Origami Yoda EU tale?
A:  It had to be Twilight of a student!

Q. Favorite DCOU story?
A:  I have to choose Batfold 1! Great story by the way!

Q. Favorite MOU Story?
A:  Infinity Folds! It was a great ending to Fold 3!

Q. The Wizarding Folds has a lot of stories now, what’s your favorite there?
A:  THE ADVENTURES OF THE ORI-MARAUDERS

Q. What was your first story EVER on the site?
A:  The Amazing Spider-Fold. I was super excited when it came out!

Q. What inspired you to do Kid Fold?
A:  Well I wanted to do something that involved The Flash, but since the Fold was already a story I thought about Kid Flash!

Q. What inspired you to do Video Pleats?
A: I made Zelda-gami WAAAY before SFC Became a thing. And since everyone was making universe’s I thought why not do Video Games!

Q. With Video Pleats, what is the one story you hope to see?
A: Probably Final Fantasy! It is a cool game series and I hope someone makes it!

Q. What do you think Kid Fold Will be doing in Justice Pleats?
A: He probably will be trying to help as much as possible.

Q. What do you hope to see in MOU Fold 4?
A: A Silver Surfer story! That would be cool!

Q. Do you have any stories you’d like to announce for DCOU?
A: Kid Fold! Season 3! Ready! Set! GO!

Q. What is a book you absolutely despise?
A: I don’t really despise books but one I never really liked was Star Wars The Clone Wars. It is based off of the movie before season one.

Q. Okay okay what about your favorite book?
A: The Strange Case of Origami Yoda!

Q. Favorite movie?
A: Star Wars: The Rise Of Skywalker!

Q. You wrote Agent Venomigami, is Agent Venom your favorite hero?
A: No. Iron man is actually my favorite superhero from Marvel.

Q. Did you enjoy the Origvenom series?
A: Yes! It was one of the first MOU stories I read on the site!

Q. Minecraft or Terraria?
A: Minecraft. I played it way before I ever heard about Terraria.

Q. What’s your favorite food?
A: I really like Pepperoni Pizza!

Q. Do you have any Pets?
A: Yes! I have three Chickens!

Q. Let’s end it with the same question as always: What do you have to say to the people reading elsewhere?
A: Keep writing! I would not have gotten where I am without practice!

Next, I recently asked you guys to send in some questions about the DCOU that I could answer. Here they are, including answers!

1. Why can’t Alan Wade play Fortnite with a demon?
Who is stopping him?
2. What is a character in the DCU that you do not want to see anyone else write about, but still, you’d want it in the DCOU
I don’t want to see anyone really touch Supergirl. I know she’s in the CW shows and stuff and people want to use her, but there’s something planned.
3. Out of all the origami universes, which one is most likely to crossover with the DCOU?
Honestly, I could see the DCOU and MOU crossing over in an elseworlds title.
4.Which version of Robin is CJ’s Robin?
Dick Grayson.
5. Why won’t the Sargento employees let me out of the cage?
Only when you fully endorse them.
6. What are the odds of seeing the Court of Owls in the DCOU?
Very high.
7. Yo, when we gonna collab on something? I mean you got Zattana in the works, that’ll be sort of close, but I’ll a real, full on collab. When that gonna happen?
Woah man! We gonna announce Zattanagami like this? Okay, well, yeah. I think a collab with you and me would be fun. We just have to think about the right story.
===================================================================
Next, Superfolder Hades wanted me to share with all of you a timeline of the Puppet Society, to also announce Batfold: 1989. 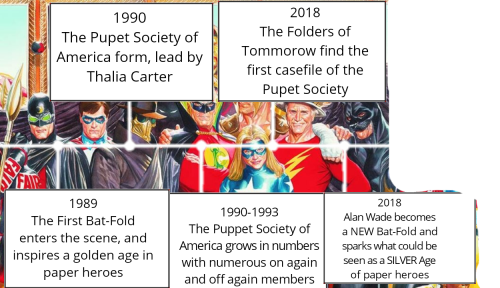 Thank you!
========================================================================
Finally, I have a special announcement:
The OYEU has officially partnered with The Justice Pleats fansite to bring you guys some unedited tales while I’m away.
It’ll mainly be the DCOU Folders stories, there won’t be main tales or anything like that. Also note that these are unedited, so besides spell-checker and stuff they’re relatively rough drafts. Once I return they’ll be edited and posted. These DCOU friday posts will actually be shorter, as I have something big planned for the DCOU Hall H, come time for July 22.
There will be one more interview: This one with Superfolder Guillermo.
Also, I really like these lore questions, I want more sent to me! I like going in depth and fleshing out the world.
For your trivia:
1. Did you know that a DCOU Friday will land on my birthday?
2. Alan Wade sleeps every day for eight hours, and makes sure to drink enough water!

I lost my account, but here I am.
View all posts by OrigamiLuke100 »

Posted on July 3, 2020, in Uncategorized. Bookmark the permalink. 4 Comments.